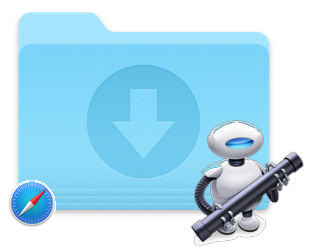 I’ve been annoyed for awhile now that Safari was auto-opening text files that I was trying to download in rapid succession via option-click on a series of links. The text documents kept popping up in front of my browser window and getting in the way.  Safari used to have preferences that you could set to tell it what to do with specific file types, but not anymore – at least not since Safari 10 on MacOS Sierra (10.12.x). The only options were to make Safari auto-open “safe” files or not auto-open any files at all. I was about to give up again.  I’ve tried to figure this out on multiple other occasions, but I’d finally had enough and decided to roll my own using Automator and some clever scripting… END_OF_DOCUMENT_TOKEN_TO_BE_REPLACED

I used to use Groups in the Contacts app a lot, sending a weekly newsletter to over a thousand people each week.  Yes, I know that’s a silly way to do it, but it was a long event email that was mostly automatically generated (via a perl script I wrote) and I had a cron job that emailed me the automatically generated portion each week.  Plus, this was something I’d set up over a decade ago, before MailChimp was really a thing.  All I had to do was add my little blurb and type in the name of the group, and I’d be done in under 5 minutes. It worked very well for me. Eventually, when Mobile Me got sunsetted and iCloud took over, Smart Groups were no longer supported, which was rather annoying, so I ended up maintaining 2 copies of the group: the smart group on one computer, and a static copy of the group that I occasionally refreshed that I could use on any iCloud-synced computer. Ever since then, bugs pop up all the time relating to Contacts and I’ve reported each one. Most of them have to do with Siri’s usage of Contacts, but they also often have to do with the propagation of duplicate Contact Cards.  This new bug however, has to do with how the Apple iOS Mail app handles contact Cards in a static group.  Here was my feedback to Apple today after a chat session with a Senior Apple Support Advisor:

I created a group in my iCloud contacts called “Settlers of Catan”, which includes my wife, for whom I have 4 email addresses. When I type “Catan” into the “To:” field of an email in Apple’s iOS Mail app and select the group from the list of options in the drop-down, it adds all 4 of her email addresses, which I hadn’t noticed until she complained that I was sending her 4 copies of each email to the group. This does not happen when I do the same thing on my MacBook Air (the Apple Mail.app on the computer only adds the first email). It does also happen on my iPhone 6s. I chatted with a Senior Support Advisor from Apple and it turns out he has the same problem and was unable to resolve the issue. He submitted this same feedback as well. Please fix this.

The advisor I chatted with had had me try a number of things, including creating a new group, etc.  I even upgraded my version of iOS to the latest (11.0).  He was unable to fix the issue. All he could do was suggest I create a duplicate contact card for my wife that only had one of her email addresses.  I told him I’d rather manually edit the email’s “To” field after selecting the group, but thanks.  So he suggested I submit the feedback above.

I took a screenshot which shows that by selecting the group, it would add 4 email addresses for my wife (Zoë) even though the group had only 1 Contact Card for her in it:

While chatting with the specialist, I mentioned another Contact-related issue and the advisor believed that it was related (because it had to do with determining what to do when dealing with ambiguous situations and clarifying what the user wants). And it had to do with how Siri responds when instructed “Tell my _____…”, such as: “Tell my mom I’m running late”. This is an instruction that relies on relationships stored in my Contact card to link it with other contact cards, such as my mom “Jane Doe”.  Often times, Siri’s response is something like this: “Which Jane Doe? Tap the one you want”, and it gives me a list containing 2 names: my mom’s name and my own name.

Here’s what I think is happening here… Siri is supposed to clear up ambiguities if she doesn’t have enough information. If I said “Tell John…” and I have multiple contacts named John, Siri should ask me which John she’s supposed to send the message to. Likewise, if I happened to accidentally add another mom relationship to my card, Siri should ask me which mom I want.  Or if I try to message mom, but she has 2 mobile numbers listed, Siri should ask me which number to use. However, I think that in the case of relationships, Siri is blindly searching for occurrences of the name I specify in my contact cards and it’s finding them in my contact card because it’s there as a relationship. So when I instruct Siri to tell my mom…, she finds the card for Jane Doe because the name matches and she finds my card because her name is entered in my card as a relationship!

I have a number of relationships saved, like my mom, dad, sister, wife, doctor, dentist, etc..  I even have a few relationships I created for an IFTTT phone number.  I added these contacts so that I could ask Siri to send commands via text to IFTTT using hashtags. I have one named “Groceries” that appends text I send it to a groceries.txt file I have on Dropbox that I share with my wife. I have 2 others: “Air Conditioners” to control my AC window units via WeMo and “Mac Mini” to send text to my computer hooked up to my entertainment center so I can enter searches on Netflix without using a keyboard (very handy!). I used to instruct Siri to send messages to these contacts just using their “names”, however Apple eventually tried to make Siri too smart and so when she heard “Tell Groceries bread hashtag add”, she started searching google instead of texting my contact named “Groceries”.  I got around this erroneous behavior by adding the “Groceries” contact as a relationship of type “groceries”. So now I just tell Siri “Tell my Groceries bread hashtag add”.  And that used to work well until this latest issue popped up where Siri asks me now “Which Groceries? Tap the one you want”, listing Groceries and me as the two options to choose from.

The advisor believed that both issues are related, and have to do with how Apple’s software is handling ambiguity.  I’m not so sure.  Yes, they both have to do with ambiguity, but Siri’s logic happens on a remote Siri server and Apple’s Mail app (I believe) is not accessing a remote server to decide which of my wife’s emails to include when composing an email to a group.

Other issues which have also popped up in the paste couple years have been: Siri’s inability to distinguish “in-laws” from my own parents/siblings and Siri’s ability to send text messages to contacts with short phone numbers, like those used to check when the next NJ Transit bus will arrive at my bus stop.  I used to be able to instruct Siri to “Tell NJ Transit 22222” and she would send “22222” (a bus stop code) to the 5-digit NJ Transit phone number.  Eventually Siri started interpreting this command as “Tell NJ Transit to 2222”, which I got around by adding a “to” to my command: “Tell NJ Transit to 22222”.  (That’s not my bus stop number, but it obviously does start with a 2.)  And then of course, Siri just started wholly refusing to send any messages to NJ Transit at all, and I believe it was because the phone number is only 5 digits.

I believe that Apple is trying to make Siri too smart and they are just getting in my way.  I have seen however that Siri does learn some things.  If I keep trying multiple times to get Siri to for example, send a text to “Groceries”, first she does a web search a couple times. Then I tell Siri simple “Send a text message” When I respond to the question asking who I want to send it to with “Groceries”, it works, and then after doing that a few times, she will respond correctly the next time I ask her to “Tell Groceries…”.  Now I’m at the point where as I said, I have to say “Tell my Groceries…”.  And after having used that work-around for awhile, now Siri can’t distinguish between my own card and the one for groceries (or my mom).  When I complained to Apple about the in-laws issue, the advisor I ended up speaking to confirmed the bug on their end by reproducing it and they actually fixed it!  I insisted to them that it used to work, because I frequently used the feature to text my mother-in-law, who was helping me with a house I was selling remotely.

Apple keeps trying to make Siri smarter, and if you ask me, they keep doing it rather sloppily.  They frequently seem to overlook how their various features will behave.  The in-laws issue was a prime example. Someone obviously wrote some code to always parse out “mother” and connect it to a contact whose relationship is “mother”, regardless of whether a contact exists whose relationship was “mother-in-law”.  The existence of that possibility didn’t occur to some programmer out there.  It used to work and Siri even interpreted what I said by typing it out as “mother-in-law”, but would send a text to my mom starting with “In-law…”.

I can’t help but think that this sloppiness started appearing in Apple’s development environment after Steve Jobs died.  They’ve been removing OS features and mucking up functionality ever since.