I bought a new Mac Mini in February of 2016 because my old 2010 Mac Mini had various growing issues with streaming video, like Netflix and Amazon Prime. Everything streams much more smoothly now, but there’s one minor annoyance with streaming Netflix content. The controls are so large that they effectively obscure up to half of the window and certain elements run off the top of the reasonably sized window.  Hence, today’s Apple feedback:

Netflix controls do not render correctly in Safari in Mac OS X 10.11.3

Netflix controls displayed during playback do not render properly. They are so big, that they extend past the top of the window. Firefox does not do this on the same computer (a brand new Mac Mini purchased 2/2016).

Background: I used migration assistant from a 2010 Mac Mini maxed out at 10.7.5. I had to re-install the OS when the ethernet port stopped working (case ID 1057375939). I have the resolution set at 720p (in order to increase the size of the text on the screen) using a brand new Magnavox LCD TV connected directly using HDMI. I also have the size of the cursor increased. Changing text size in Safari has no effect. Screen caps:

Volume control off top of window: 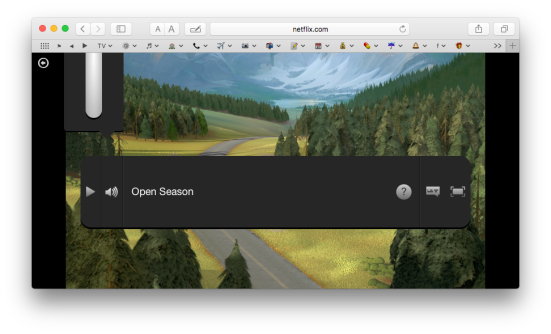 Preview Image off top of window: 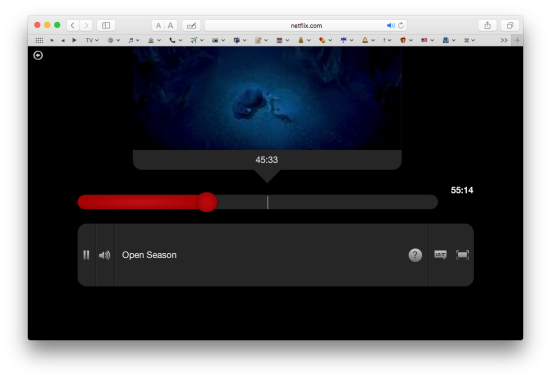 I googled this issue for hours this morning and I cannot find anyone having the same issue.  Perhaps people aren’t hooking their Macs up to newer TV’s?  Perhaps this is an issue from using migration assistant?  If anyone knows how to fix this issue with Safari’s rendering of Netflix controls, please comment!